One of the unique key features of E&I Electrical Designer is the way that an object or a set of objects link with relationships with other set of relevant objects. To put simply, this feature allows to create the intelligent link between two objects or a set of objects, be it electrical, logical, physical, or mechanical in nature. This unique feature ensures the updating of information with appropriate deliverables in all aspects for every object placed in the design.

Benefits of this key feature includes:

Let us take two examples to understand this in a better way.

This helps the Designer to avoid any mistake of adding irrelevant objects in the structure which can interface with the Design hierarchy.

Once the Designer adds the objects in Tree in the appropriate hierarchy and created the appropriate parent-child relationship, the entire structure then can then be easily drag and dropped from the Tree to the drawing area for graphical representation.

There is a separate tab for making changes in the created structure as “Component Overview”. From this tab, one can directly edit the properties of all the objects falling under that structure. This is a dynamic process. The changes made in the Tree structure at any level will be considered and updated at all the other levels and will also be reflected in the drawing.

To summarize, E&I Electrical Designer is more than a Design and drafting tool unlike any, it is an intelligent solution created with a perfect blend of unparalleled engineering experiences and technological expertise of Electrical Engineers and Developers, making it a “One stop solution” for all your Design needs. 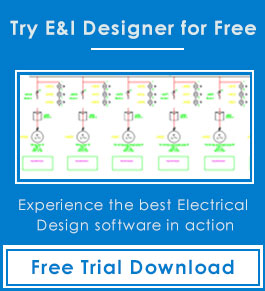 Have Questions About E&I Electrical Designer?

Want to know more about E&I Electrical Designer, explore the solution with
the Free Trial Version or Request a Demo with our experts.